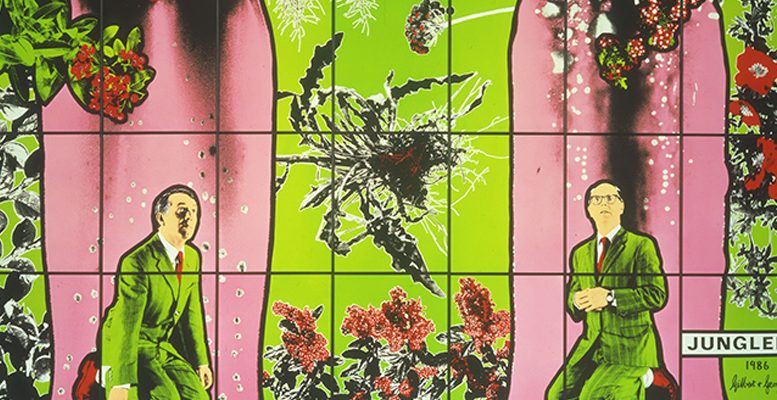 Galleries and Museums provide spaces where we can explore the world around us and our relationships make up a large part of that world. Below are a few artists and artworks from Aberdeen Gallery & Museums collections that, I think, are wonderful examples of identity and relationships in all their glorious forms.

Jenny Saville is an artist known for her boundary-braking depiction of the human form. Saville is interested in showing the body as visual landscape, distorting perspectives and assumptions to challenge the viewer to see the body in a different way.

Saville met fashion photographer Glen Luchford in 1994 when Vogue magazine commissioned him to take a portrait of the artist. Saville and Luchford began to collaborate, producing ten immensely powerful photographs. Closed Contact No. 4 is a large scale detail of a distorted torso pressed against plexi-glass and the unusual perspective drives our attention to the tones and abstracted shapes of the beautiful folds of flesh.

In 2011, when living and working in Sicily, Saville began photographing transvestites and transgender people in Rome as she was interested in portraying transgender bodies in an honest and sympathetic way. Although the model for Close Contact No. 4 was a female, we can clearly see the beginning of Saville exploring the ambiguity of gender and the beauty of bodies in all forms.

The American-born artist Kaffe Fassett is known for his colourful designs in needlepoint, patchwork, knitting, painting and ceramics. In the late 1960s Fassett met the Scottish fashion designer Bill Gibb and they remained close friends and design collaborators until Gibb’s death in 1988. Together they created many of the multicoloured knitwear that became one of Gibb’s trademarks designs. A 2014 exhibition called ‘Kaffe Fassett – 50 Years in Colour’ was held in Aberdeen Art Gallery and inspired a new generation of fashion and textile designers. He has resided in England since 1964 with his husband and studio manager Brandon Mably.

This silver and enamel brooch was given to Anne Donald by Bill Gibb around 1978 following her order of his collection for the ‘Windmill’ boutique. They were produced in a variety of colours to match the colour themes of each year’s collection. It is a beautiful example of Fassett’s love of colour, shape and pattern and in some cultures the bee is a symbol of community, power and personal brightness – a perfect symbol for Pride!

In Aberdeen Art gallery, there is a gallery called Art of Empowerment, which showcases the advancement of women. One of the artists on display there is Dorothy Johnstone who painted this sublime portrait of fellow artist Anne Finlay. Johnstone has framed Anne Finlay’s challenging expression and unabashed confidence with strong black squares and a shock of bright red.

Finlay and Johnstone became friends at Edinburgh College of Art where Johnstone, along with Mary Newbery and Cecile Walton, founded the ‘Edinburgh Group’. It was said that the Edinburgh Group looked to created artworks that were “unique rather than universal”.

In 1919, Johnstone had a relationship with Vera ‘Jack’ Holme who was a suffragette, chauffeur, actress and aid worker. Known as Jack to her friends, Holme spent time with Johnstone and other artists in Kirkcudbright in Scotland.

Marie Laurencin was prolific artist at the turn of the 20th century and perhaps one that should be more prominent when remembering artist of that time. Her influences included Fauvism, Cubism, poetry, music and theatre. Laurencin had relationships with men and women and among her patrons were the avant-garde couple Gertrude Stein and Alice B. Toklas. From the 1920s Laurencin painted ethereal female figures using a soft pastel palette and blended brushwork. Sometimes posed in groups with animals or intruments, the women appear as their own society of muses. ‘La Guitare’ is a perfect example of this style and with the Laurencin’s hallmark of simplified black eyes, drawing the viewer into the musician’s dream-like state.

Amongst her models were celebrities and members of the Ballets Russes, for whom she also designed costumes that blended the roles of gender representation on stage. As well as painting and costume design, Laurencin was a gifted illustrator and created work to accompany translations of poetry by the Ancient Greek writer Sappho. Sappho was a leader in lyrical poetry about love between women and was from the Greek Island of Lesbos, from where the term lesbian is derived. Laurencin inspired by the creative role of women and she portrayed actors, dancers, writers and artists as female figures of power as well as beauty.

Gilbert Proesch and George Passmore are two artists who work together as the collaborative art duo Gilbert & George. They met at St Martin’s School of Art in London in 1967. They married in 2008 but have since said that it “it was love at first sight”.

Gilbert and George have always had an inclusive focus to their work, adopting the motto ‘Art for All’. They are perhaps best known for their large scale photo works known as The Pictures. Each picture is made up of several separately framed photographic images which join together to make the whole artwork. Gilbert and George often appear in their artworks, as if communicating directly to the viewer. In ‘Jungled’ the subject matter of is both exotic and erotic. The suited men kneel before two enormous phallic shapes surrounded by exotic plant forms, as they stare up in awe at the jungle which engulfs them. The imagery and vibrant colours perfectly combine to create an artwork that is both natural and sensuous.

New city primary school opens News Image Milltimber Primary delliot Tue, 24/05/2022 – 11:06 am Construction of the £16 million Milltimber Primary School has been completed and today opened its doors to pupils and staff. Robertson Construction started work at the replacement school within the Oldfold Farm development in the autumn 2020 – part of a £100 million investment by Aberdeen City Council in four new city schools. Milltimber Primary School have increased capacity – for 434 pupils up from 267 – plus an additional 60 Early Learning and Childcare (ELC) places, ensuring that pupils in the growing catchment area can continue to attend their local primary school with other children from their community. The state-of-the-art facilities offer enhanced outdoor play spaces and PE facilities to promote health, fitness and wellbeing, as well as improved opportunities for outdoor curricular learning and social interaction. Aberdeen City Council Co-Leader Councillor Ian Yuill said: “This is an exciting time for everyone involved and we are delighted to welcome the pupils on their first day in Milltimber Primary School.” “Milltimber Primary School will serve the needs of the community for generations to come. It provides pupils and staff with modern facilities which not only enhance the learning experience, but also helps the Council provide the highest standard of education for our young people who are the future of our City Council.” Councillor Jessica Mennie, vice-convener of the education committee, said: “The completion of the school marks the latest milestone in our Expansion Programme.” “Having the very best facilities available is vital to our ambitious strategy around education delivery in Aberdeen – but the leadership team, staff and pupils are the most important part of the success.” Milltimber, alongside three other new and replacement schools at Countesswells, Riverbank and Torry which are set to open in 2023, forms part of the Education New Build Programme which will contribute to the City Council’s Learning and Childcare expansion programme. The school has already impressed school captains, primary seven pupils Calum Wood and Beth McIntosh. Calum said: “The school is amazing, hi tech and fit for the future.” Beth added: “It’s breathtaking and even better once inside.” Lynsey Cradock, headteacher, said: “This facility will provide a wonderful learning environment for our pupils which will enable them to grow, achieve and succeed not only now but also in the future. With all our wonderful facilities, we can…