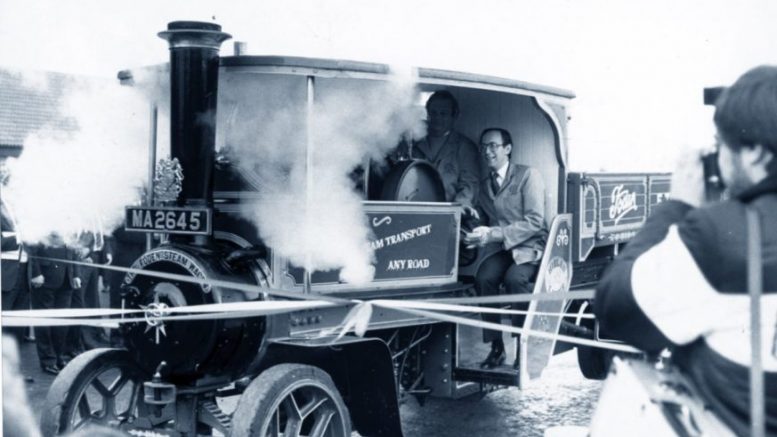 The suburbs and communities of Aberdeen are the many strands which make up the tapestry of the Granite City as a wonderful place to live, work and play.

Join us for a delve through the archives to shine a spotlight on the rich history and fond memories, along with some well-known faces, over yesteryear in the city.

The then Scottish Secretary Malcolm Rifkind took the wheel of a Foden five-ton steam lorry at the opening of the Five Star Truck Inn at Altens in 1987.

Adam Duguid, night-shift doughman at Chalmers’ Bakery at Bucksburn, puts a batch of bread in the oven in 1984.

Members of the Aberdeen Shotokan Karate Club were in full training in preparation for a course and examination to be held in November 1969.  Here Michael Turnbull practices the Tobi-Geri (flying kick) on John Watt, watched by the other members of the club at Woolmanhill.

Bridge of Dee was under water after a water main burst in 1991, causing a million-gallon flood on the south side of the city. Gushing water, up to six inches deep in places, reduced morning rush-hour traffic to a sea-snails pace, creating a two-mile tailback,  while hundreds of city households were left without drinking water.

Check out the gantry of Doug Snowie’s bar at the Ferryhill House Hotel in 1992 with the north-east’s biggest collection of single malt whisky at that time. The hotel had 150-170 tipples ranging from Auchroisk Singleton to Tomintoul malt. Eyebrows were raised at the time at the cost of a dram of 1960 Glen Grant, checking in at £7.

A reflection on more tranquil times in 1964, with a group of men sailing their model boats on the pond in Duthie Park.

After years of complaining and a petition from residents, Rosemount got its first pedestrian crossing on Rosemount Place, a few yards west of Watson Street, in 1974.

Harlaw Academy pupils took the first step in helping to set up a Good Samaritans scheme in Garthee in 1976 by distributing a questionnaire in the area which asked  people if they were interested in becoming street wardens and try to pinpoint where the old people are in the area. Pictured above are 10 of the pupils taking part in the operation. They are (left to right): Barbara Milne (15), Irene Anderson (16), Jennifer Smith (16), Susan Andrew (15), Hazel Paterson (15), Angela Reid (15), Dawn Moir (16), Helen Fyfe (15), Alison Tosh (16) and Carol Thomson (15).

New city primary school opens News Image Milltimber Primary delliot Tue, 24/05/2022 – 11:06 am Construction of the £16 million Milltimber Primary School has been completed and today opened its doors to pupils and staff. Robertson Construction started work at the replacement school within the Oldfold Farm development in the autumn 2020 – part of a £100 million investment by Aberdeen City Council in four new city schools. Milltimber Primary School have increased capacity – for 434 pupils up from 267 – plus an additional 60 Early Learning and Childcare (ELC) places, ensuring that pupils in the growing catchment area can continue to attend their local primary school with other children from their community. The state-of-the-art facilities offer enhanced outdoor play spaces and PE facilities to promote health, fitness and wellbeing, as well as improved opportunities for outdoor curricular learning and social interaction. Aberdeen City Council Co-Leader Councillor Ian Yuill said: “This is an exciting time for everyone involved and we are delighted to welcome the pupils on their first day in Milltimber Primary School.” “Milltimber Primary School will serve the needs of the community for generations to come. It provides pupils and staff with modern facilities which not only enhance the learning experience, but also helps the Council provide the highest standard of education for our young people who are the future of our City Council.” Councillor Jessica Mennie, vice-convener of the education committee, said: “The completion of the school marks the latest milestone in our Expansion Programme.” “Having the very best facilities available is vital to our ambitious strategy around education delivery in Aberdeen – but the leadership team, staff and pupils are the most important part of the success.” Milltimber, alongside three other new and replacement schools at Countesswells, Riverbank and Torry which are set to open in 2023, forms part of the Education New Build Programme which will contribute to the City Council’s Learning and Childcare expansion programme. The school has already impressed school captains, primary seven pupils Calum Wood and Beth McIntosh. Calum said: “The school is amazing, hi tech and fit for the future.” Beth added: “It’s breathtaking and even better once inside.” Lynsey Cradock, headteacher, said: “This facility will provide a wonderful learning environment for our pupils which will enable them to grow, achieve and succeed not only now but also in the future. With all our wonderful facilities, we can…