Aberdeen has long been famous for its 45 parks and gardens, and citywide floral displays which include two million roses, eleven million daffodils and three million crocuses. Duthie Park opened in 1899 on the north bank of the River Dee. It was named after and given to the city by Miss Elizabeth Crombie Duthie of Ruthrieston in 1881. It has extensive gardens, a rose hill, boating pond, bandstand, and play area as well as Europe's second largest enclosed gardens the David Welch Winter Gardens.

Hazlehead Park, is large and forested, located on the outskirts of the city, it is popular with walkers in the forests, sports enthusiasts, naturalists and picnickers. There are football pitches, two golf courses, a pitch and putt course and a horse riding school.Aberdeen's success in the Britain in Bloom competitions is often attributed to Johnston Gardens, a small park of one hectare in the west end of the city containing many different flowers and plants which have been renowned for their beauty. The garden was in 2002, named the best garden in the British Islands.

Seaton Park, formerly the grounds of a private house, is on the edge of the grounds of St Machar's Cathedral. The Cathedral Walk is maintained in a formal style with a great variety of plants providing a popular display. The park includes several other areas with contrasting styles to this. Union Terrace Gardens opened in 1879 and is situated in the centre of the city. It covers 2.5 acres (10,000 m2) in the centre of Aberdeen bordered on three sides by Union Street, Union Terrace and Rosemount Viaduct. The park forms a natural amphitheatre located in the Denburn Valley and is an oasis of peace and calm in the city centre.

Situated next to each other, Victoria Park and Westburn Park cover 26 acres (110,000 m2) between them. Victoria Park opened in 1871. There is a conservatory used as a seating area and a fountain made of fourteen different granites, presented to the people by the granite polishers and master builders of Aberdeen. Opposite to the north is Westburn Park opened in 1901. With large grass pitches it is widely used for field sports. There is large tennis centre with indoor and outdoor courts, a children's cycle track, play area and a grass boules lawn.

The Den is a new purpose build facility which encourages endless active play for boys and girls to have fun, make friends and eat healthy! Indoor and
Outdoor Play. The Den restaurant has a large menu and facilities to cater for large birthday parties and seasonal events! 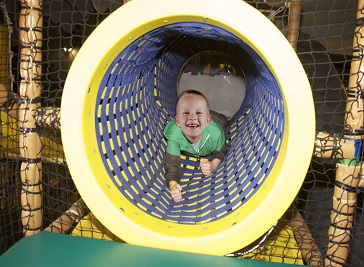 It is Scotland's Greatest Indoor & Outdoor Family Entertainment Complex. Smugglers Cove, is our award-winning indoor and outdoor adventure play area! We have a massive play frame and soft play area inside, as well as our 3 huge tree huts outside.