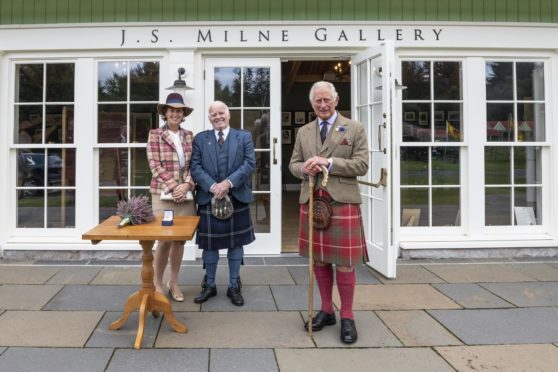 An Aberdeen businessman has been honoured by the Braemar Royal Highland Society.

Mr Milne, who is the chairman of the Aberdeen-based Balmoral Group, was presented with his award as part of the virtual Highland Games that was filmed recently in the Princess Royal and Duke of Fife Memorial Park.

Jim was recognised for his kind financial support and outstanding
dedication to the society, particularly in the building of the new Highland Pavilion, which was officially opened by HM the Queen during her visit to Braemar Gathering two years ago.

The Duke visited the event along with the society’s vice patron Captain Mark Nicolson and was also presented to Mr Charlie Murray, vice chairman of The Scottish Highland Games Association, and champion heavy Kyle Randalls from Grangemouth.

David Geddes, president of the Braemar Royal Highland Society, said he was delighted the society had made the award in recognition of Jim’s valued and enthusiastic support for the highland game.

Jim becomes one of only fifteen people who hold this position with the Society.

He was accompanied at the presentation by his wife Gillian.