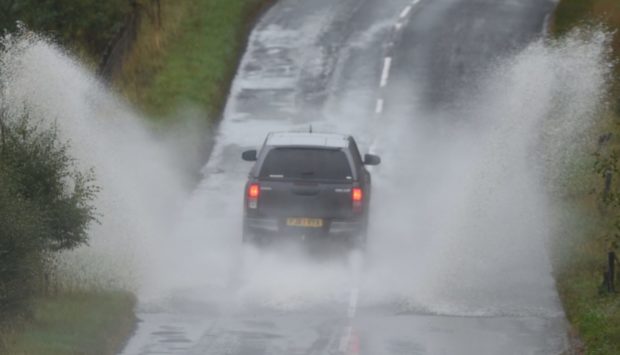 The Met Office has issued a warning for heavy rain for the weekend.

Covering the entire east coast of Scotland, the yellow alert will come into force at 3am on Saturday and remain in place until 6pm on Sunday.

The rain is expected to be “heavy and persistent throughout Saturday and into mid-Sunday across eastern Scotland”.

More than 100mm (3.9ins) of rain is expected for high areas of Aberdeenshire and the Highlands, with other places seeing between 25 and 50mm (1in-1.9ins).

Forecasters are warning that due to an “unusual wind direction”, areas which are normally sheltered could be hit.

According to the Met Office, spray and flooding is expected and could lead to difficult driving conditions and road closures.

Flooding may also cause buses and trains to be cancelled, as well as issues for some properties.

Fast flowing or deep floodwater may also cause a “danger to life” according to the forecaster.

A statement from the Met Office said: “Heavy rain will push north and west across the UK, clearing from much of southeast England by Saturday afternoon.

“However, it is expected to remain heavy and persistent throughout Saturday and into mid-Sunday across eastern Scotland, the far northeast of England, much of Wales, and southwest England.

“This is likely to bring flooding and some disruption to travel. Many places will see 25-50 mm of rainfall, with totals of 100-125 mm expected over the high ground of eastern Scotland, and perhaps parts of Wales and southwest England.

“The unusual wind direction associated with the rainfall will mean that the peak rainfall totals are likely to occur in some areas that are usually well sheltered and direr during unsettled spells of weather.

“During Sunday the rain will turn more showery in nature and become significantly less widespread.”