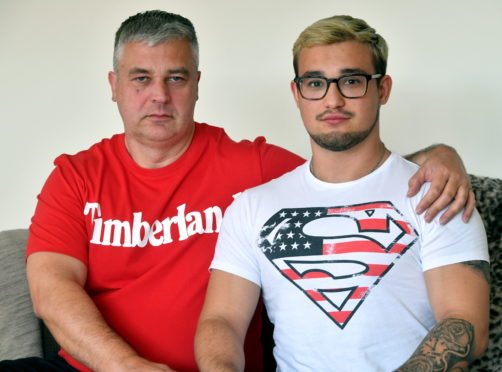 Apple’s decision to ban people who aren’t able to wear face coverings in their store has left an Aberdeen father and son sickened and a legal firm planning to take the company to court.

Tom Wade was turned away from the Union Square store even though he is exempt from the rule because he has autism.

The 21-year-old was trying to get his phone fixed but door staff wouldn’t let him in the shop, despite explaining his position to them.

At the time Mr Wade was wearing a sunflower lanyard which acts as a reminder to people that the person wearing it has a hidden disability.

The Disability Law Centre is advancing multiple complaints against the Apple Store nationwide for “discriminating against people with disabilities”.

Principal solicitor at the Law Centre, Daniel Donaldson, said: “I can’t believe this is 21st century Scotland – this is happening now.

“I have repeatedly asked for risk assessments that have informed their decision but they have refused to share these.

“The Equality Act is clear. It is unlawful disability discrimination to refuse a service to a person with disabilities.

“It is also unlawful disability discrimination to harass someone for example by demanding to know intimate details of their medical background.

Scottish government guidelines state those exempt from wearing a face covering should not be “denied access to public transport, shops or public places”.

Mr Wade said: “It makes me feel sick to know that I get discriminated against in a shop that I need to go into and use a lot.

“This has really affected my confidence and my efforts to be independent.

“It makes me upset that people that don’t look disabled get discriminated against. If I looked disabled they wouldn’t even have asked.”

His father, Gary Wade, who is one of the directors of Grampian Autistic Society, has hit out at the phone giant for “being discriminatory under the Equality Act 2010”.

He added: “Tom phoned me quite upset so I phoned and asked to speak to the manager.

“As far as Apple are concerned they are protecting staff and not discriminating against a disability.

“The manager did ask if he was offered a visor instead and he wasn’t. He was just turned away.

“What people don’t realise is that it takes a number of years and support to get someone confident enough to go out on their own to shops and on public transport.

“That’s now a huge knock to his confidence. He doesn’t particularly want to wear a sunflower lanyard and label himself but he does.”

Apple declined to comment, but their guidelines say they will offer reasonable alternatives to customers who are unable to wear a face due to existing medical conditions.

This includes serving customers at the store front, serving them digitally or offering customers temporary use of a face shield while in store.

Drop-in consultation for residents and businesses in Belmont Quarter next week News Image Belmont Quarter artist impressions
kaallan
Wed, 11/05/2022 – 9:43 am
A drop-in consultation to gather information from residents and businesses in Belmont Street and nearby streets for a new permanent café culture in the area is being held next week.   The £1.5million investment in the Belmont Quarter area from Aberdeen City Council will help to grow city centre employment, create a metropolitan look which will develop as an attractive food and drink destination, and become a culturally distinctive neighbourhood that will enhance the conservation area.   The drop-in event includes two options for the area for what the café culture will look like – barrier outdoor seating with umbrellas which could be in place in late Autumn, or shelter structures which could be installed next Spring.   The two-day drop-in event, which is complemented by an online consultation, will also include operational plans for how the Belmont Quarter would work for deliveries, waste trucks, and other requirements depending on the design chosen.   The event will have designers and engineers on hand to answer queries, and there will also be council officers available from 2pm until 4pm each day to answer any specific licensing questions.   Both businesses and residents will continue to be consulted on the draft design over the coming weeks.   An Aberdeen City Council spokeswoman said: “It is fantastic to be able to have this drop-in event along with an online consultation and we’d encourage people who live and work in the Belmont Quarter area to come along, see what the two proposals are, and give feedback to the team.   “The café culture in the Belmont Quarter is just one of several exciting changes happening in the city centre and we look forward to what’s coming up in the months ahead.”   The city centre, new Aberdeen Market, and Queen Street projects are part of the City Centre Masterplan (CCMP), a regeneration blueprint which is transforming the city centre while conserving its proud heritage.   Since it was approved in 2015, the CCMP has already delivered several achievements to date including redevelopment of Provost Skene’s House, the redevelopment of Aberdeen Art Gallery, the Music Hall, Marischal Square, and Broad Street. The regeneration of Union Terrace Gardens will also provide a wheelchair-accessible multi-function space…

Cops are continuing to appeal for information after Mark Dickson was last seen leaving his home on Niven Road in Inverkeithing, at around 1.20pm on Thursday, May 5. Daily Record – Aberdeen …

Police are looking to trace the female owner of the Staffordshire bull terrier which attacked a five-year-old girl in Livingston. Daily Record – Aberdeen …